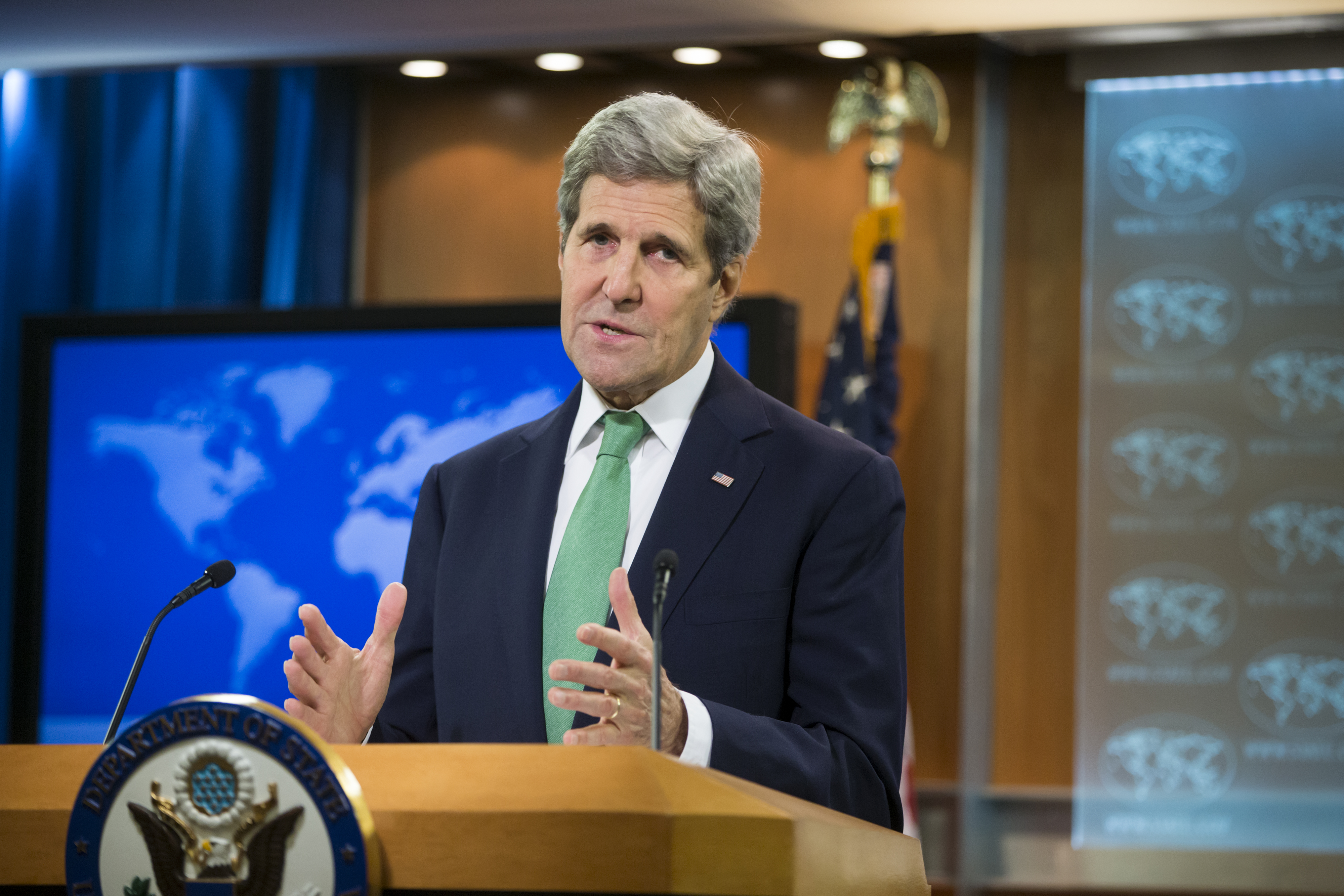 The latest survey of over 1,000 US adults conducted on behalf of the American Bar Association’s International Criminal Court (ICC) Project shows a slight positive shift in American knowledge concerning the ICC and its work overall.

Knowledge and Awareness of the ICC

Knowledge of the ICC among Americans is now at the highest it has been since this tracking began, at 45%, which represents a 6-point increase from the last survey in April 2016.  This shift can be explained by an increased awareness among youth, for whom awareness has surged (10%) since April 2016. This increase has led to a discrepancy in the level of awareness among different age groups.  While 60% of people in the 18-34 age group are aware of the ICC, this figure falls to 40% for older age groups. 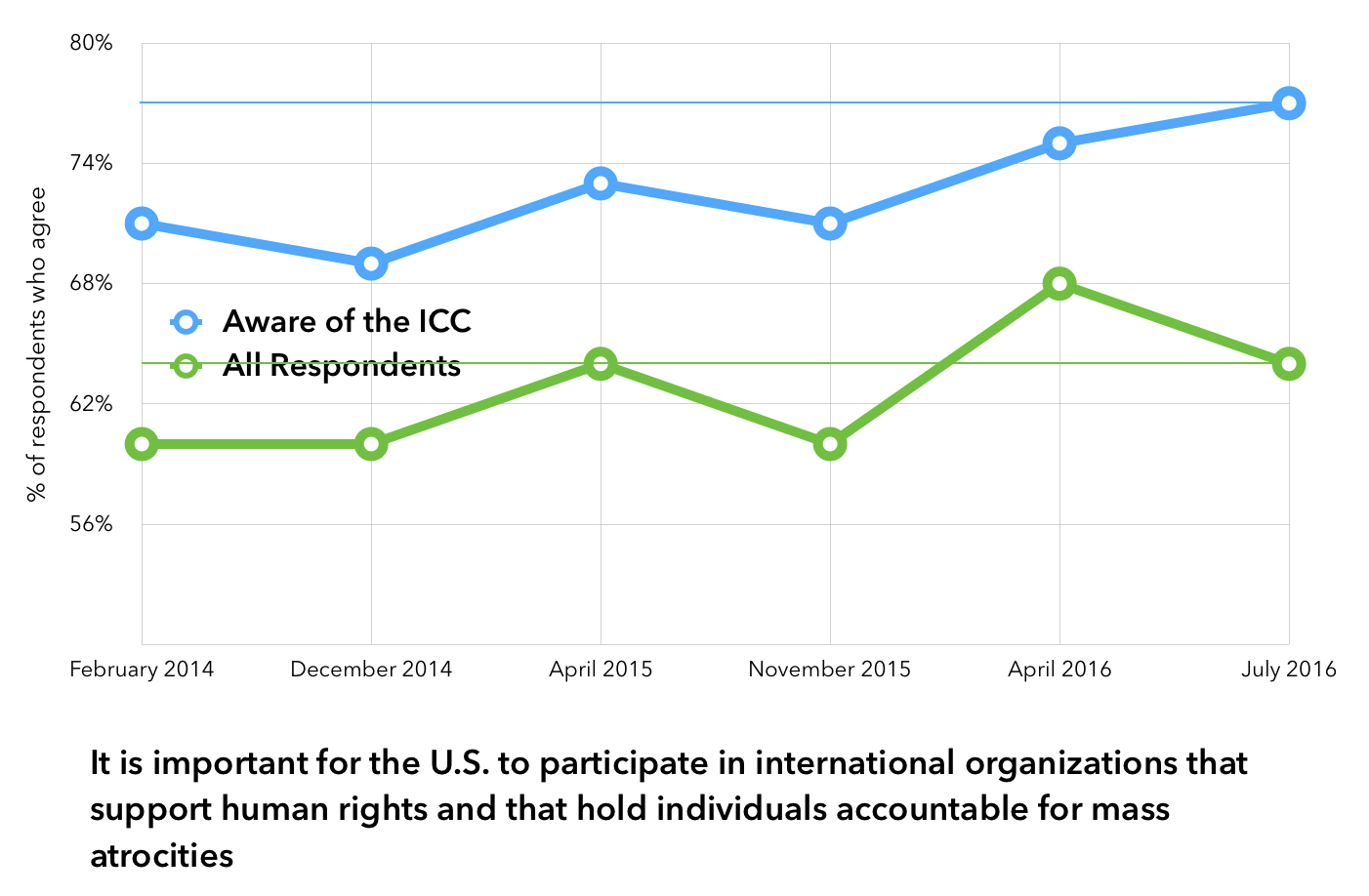 Despite this slight positive shift in awareness, the ICC remains an relatively unknown entity to the majority of American people. Eight in ten Americans don’t know anything or just know a little bit about the ICC, while only two in ten have a solid knowledge of the ICC. Among people who indicate they are familiar with the ICC, 60 percent said that the United States was part of it (while of course it is not). Notwithstanding this lack of familiarity with the ICC, when we look at the results of our survey, we notice an alignment between public opinion and the ICC’s objectives.

Perceptions of the Court’s Objectives

This wave of the survey asked two questions focusing on crimes the Islamic State (ISIS/ISIL) committed against religious and ethnic minorities in Syria and Iraq. On this matter, nearly half (49%) of Americans agree that “the US government should push diplomatically and politically for the ICC to get involved in investigating and prosecuting these crimes in Syria and Iraq”, while only 21% deem that “it is not the US government’s job to get involved in investigating and prosecuting theses crimes in Syria and Iraq”. When asked if the US should provide assistance (including financial assistance) to the International Crime Court to conduct investigations and prosecutions of atrocity crimes committed in Syria and Iraq more than half (54%) of Americans answered that the US should support the ICC, while less than a quarter (24%) said it should oppose the ICC. These results underline that Americans believe that the ICC is crucial when it comes to certain matters.

Perception of the Court and US Membership

Working with an international organization such as the ICC can yield concerns regarding a country’s sovereignty and autonomy. However, this problem does not appear to be big concern for Americans, among whom only about a quarter (28%) believe that “joining international organizations concerned with human rights and holding individuals accountable for mass atrocities is a risk to the US because it could hurt our autonomy” and only about a third (32%) that “joining the ICC would compromise America’s sovereignty as a nation”. However, it is important to note that both these measures have increased in recent waves by small amounts.

Writ large, the trend since this study began in early 2014 is one of increased involvement in the ICC, with a net of 10 points (from 34% to 44%) improvement from February 2014 through now. As overall awareness for the ICC and its aims improves over time, and the proportion of people who say “Don’t know” to these questions declines, there is clear steady momentum towards support for the ICC and its aims.

-These are some of the findings of an Ipsos poll conducted on behalf of the American Bar Association from July 11-12, 2016. The previous waves of the study were conducted from April 22-25, 2016; November 16-18, 2015; April 2-6, 2015; February 21-24, 2014; and December 4-8, 2014. For these surveys, Ipsos undertook online surveys of 1,087; 1,006; 1,003; 1,005; 1,004; and 1,005 adults, respectively. Weighting then employed to balance demographics and ensure that the sample’s composition reflects that of the U.S. adult population according to Census data and to provide results intended to approximate the sample universe. Statistical margins of error are not applicable to online polls because they are based on samples drawn from opt-in online panels, not on random samples that mirror the population within a statistical probability ratio. The credibility interval for a sample size of 1,087 is +3.5 percentage points. All sample surveys and polls may be subject to other sources of error, including, but not limited to coverage error, and measurement error. For more information about credibility intervals, please see the appendix.

- These slides also contain some data filtered on just those respondents reporting that they know ‘A great deal’, ‘A fair amount’, or ‘ A little bit’ about the ICC at Q1 (cutting out those who say they know ‘Nothing at all’). This reduced the filtered base size to 379, and is referred to in the data as ‘Aware of ICC’ audience.

- Statistical margins of error are not applicable to online polls because they are based on samples drawn from opt-in online panels, not on random samples that mirror the population within a statistical probability ratio. - All sample surveys and polls may be subject to other sources of error, including, but not limited to coverage error, and measurement error.

July 2016 © 2016 Ipsos. All rights reserved. Contains Ipsos’ Confidential and Proprietary information and may not be disclosed or reproduced without the prior written consent of Ipsos.

Among Americans with knowledge of the International Criminal Court (ICC), desire for more support, but unsure if the U.S. should join the Court.

Americans continue to support involvement with the International Criminal Court (ICC), with some opposition to the U.S. becoming a full member of the Court.

Increases in Americans’ support for the International Criminal Court (ICC), as well as some support for Palestinian membership in the Court.

Research finds a slow but steady trend over the past two years in favor of greater U.S. involvement in the International Criminal Court (ICC), with public support for international arrest warrants for Heads of State.

Recent poll shows continued growth in Americans’ awareness of the International Criminal Court (ICC), support for US membership, and support for ICC casework. Most Americans also think terrorism should be fought with both the military and the courtroom.

Most recent poll finds continued growth in Americans’ awareness and support for the ICC, and a surprising number that support an ICC investigation in Afghanistan of all parties, including American personnel.