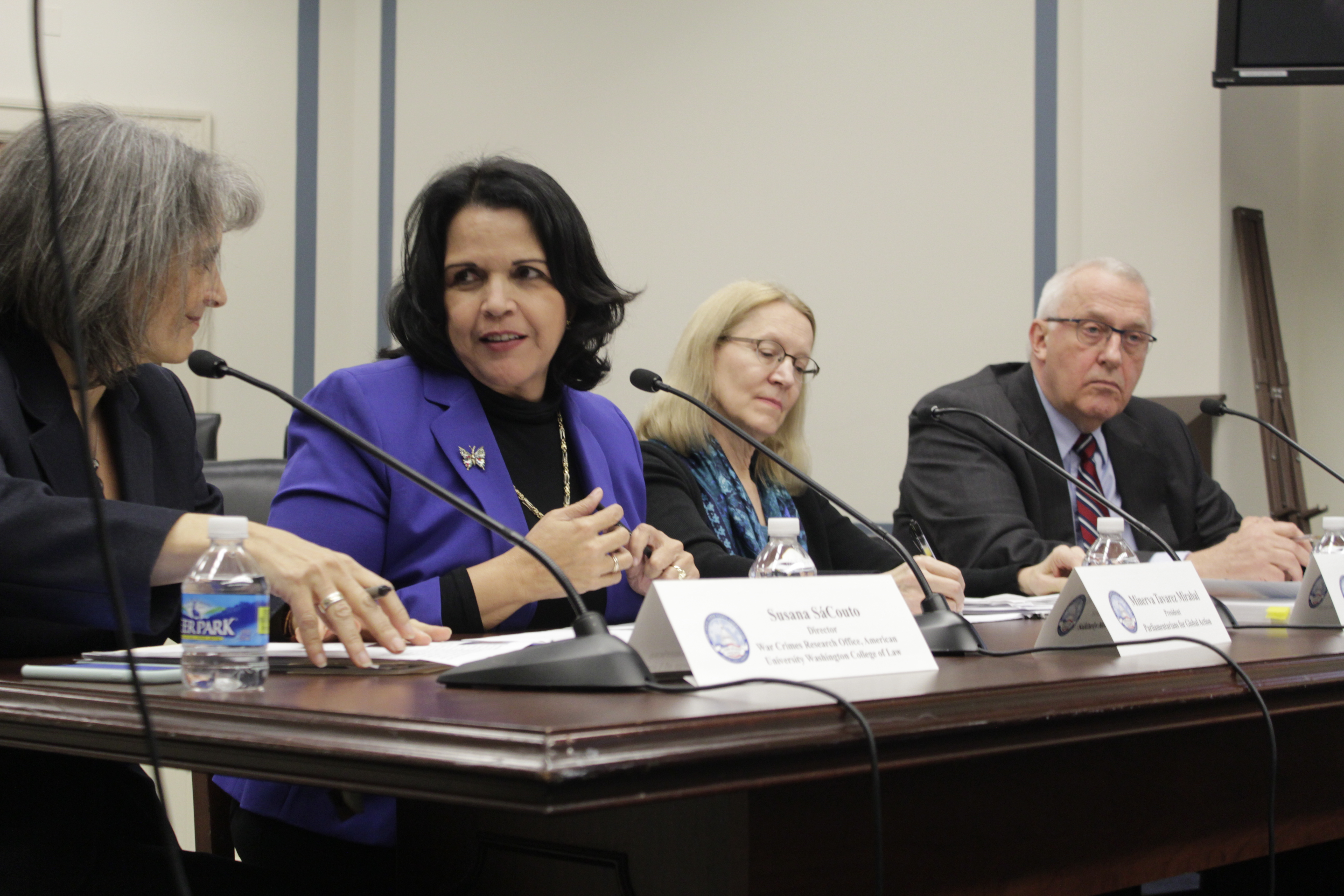 On February 10, the Tom Lantos Human Rights Commission of the United States Congress hosted a very well-attended panel briefing on the potential role that the International Criminal Court (ICC) could play in achieving justice for atrocity crimes committed in Syria and Iraq. The briefing began with opening remarks by co-chair of the Tom Lantos Human Rights Commission, U.S. Representative James P. McGovern (D-Mass), who stressed that on-going mass atrocities in Syria and Iraq demand justice, and that the ICC and other avenues for accountability must be pursued.

The first panelist was Congresswoman Minou Tavarez Mirabal (Dominican Republic), President of the Parliamentarians for Global Action. Rep. Mirabal emphasized the need to bring to justice the persons most responsible for mass-atrocities crimes committed in Syria and Iraq, and also in other countries in which so-called Islamic State is active. She underscored the inadequacy of prevailing counter-terrorism strategies and the important role that the ICC or other appropriate jurisdictional mechanisms should play in bringing about justice and accountability. It is for these and other reasons, Rep. Mirabel concluded, that parliamentarians around the world were united in pushing for greater accountability in Syria and Iraq, among other places.

Her presentation was followed by remarks from Dr. Jane Stromseth, Professor of Law at Georgetown University and former Deputy to the U.S. Ambassador-at-large for Global Criminal Justice. Taking note of current roadblocks to more full investigations and prosecutions, Prof. Stromseth detailed ways in which the U.S. government is working to advance accountability for mass atrocities in Syria and Iraq, including through prosecutions for atrocity crimes by the so-called Islamic State before domestic courts in Iraq and the United States, contemporaneous efforts to document and gather evidence of atrocity crimes, and programs aimed at providing assistance to the victims of these atrocities. She did cite existing legislation that places restrictions on U.S. funding to the ICC.

The final panelist was James Stewart (Canada), the Deputy Prosecutor of the ICC. In his remarks, Deputy Prosecutor Stewart discussed the jurisdictional limitations that prevent the ICC from having jurisdiction in Syria and Iraq, but highlighted on-going efforts to determine if foreign fighters of the so-called Islamic State whose nationality puts them within the ICC’s jurisdiction were sufficiently responsible enough to warrant investigation by the Court. He also confirmed that the ICC was continuing to look into whether alleged atrocity crimes committed by the Islamic State in Libya - where the Court does have jurisdiction pursuant to an U.N. Security Council referral - could lead to a formal investigation.

The moderator of the panel briefing was Professor Susana SáCouto, Director of the War Crimes Research Office at the American University Washington College of Law. Prof. SáCouto oversaw numerous and insightful questions from the audience that included congressional staffers, representatives from various non-governmental organizations, and the general public.

The American Bar Association’s (ABA) International Criminal Court (ICC) Project is an independent initiative of the ABA Center for Human Rights that advances international criminal justice and US-ICC relations through advocacy, education and practical legal assistance. More information about the ABA’s ICC Project can be found at its website.