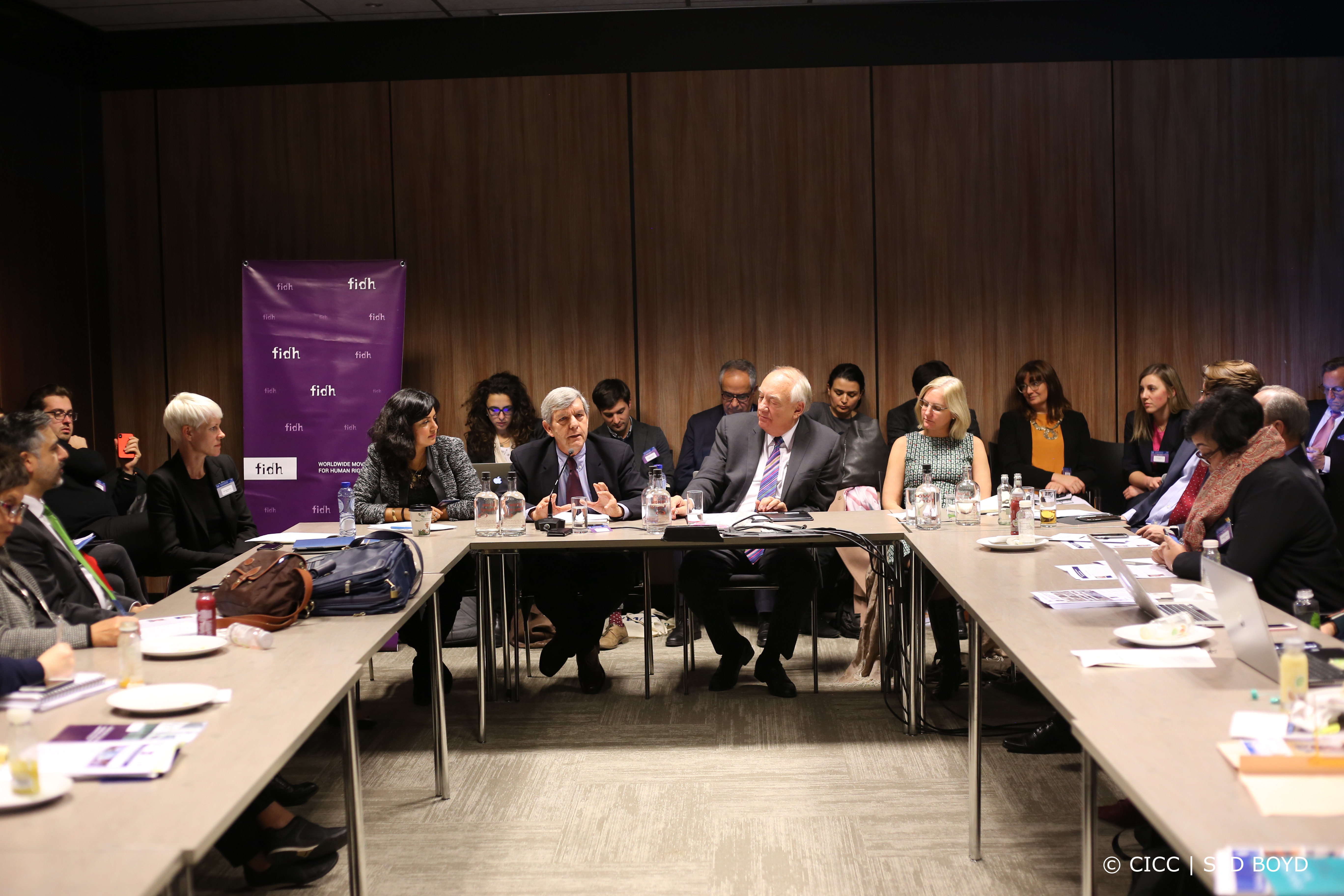 The Hague, the Netherlands, Dec. 6, 2018: In cooperation with the International Federation for Human Rights (FIDH), the ABA’s ICC Project and Criminal Justice Section held a side event during the 17th Session of the Assembly of States Parties of the International Criminal Court in The Hague. Convening a group of distinguished experts with experience in U.S. policymaking, human rights investigations, and international criminal accountability advocacy, the discussion centered on the challenges and opportunities for increased accountability presented by the International Criminal Court’s recent examinations and investigations.

Ambassador Stephen J. Rapp, former U.S. Ambassador-at-Large for Global Criminal Justice, gave an overview of how U.S. policy towards the ICC has evolved since the Court’s creation. He highlighted  efforts of previous U.S. administrations to forge a more cooperative relationship with the Court and its work, from sending observer delegations to the ICC ASP starting in 2009 to the U.S. role in facilitating the transfer of two ICC suspects to the Court.  Amb. Rapp also reminded participants that bipartisan support remains in the United States for justice and accountability in many global situations, and noted progress made in cementing the prohibition on torture in U.S. law through recent legislative changes.

Michael S. Greco, Chair of the ABA’s ICC Project, described the vital role civil society and the legal profession can play in moving accountability efforts forward and in holding governments accountable when human rights are violated.

Discussants also compared efforts at achieving accountability attempted by civil society and the international community for alleged conduct in Afghanistan and Myanmar, including through universal jurisdiction cases and UN-mandated investigative processes. Katherine Gallagher of the Center for Constitutional Rights described attempts to seek justice and accountability for torture and other crimes through universal jurisdiction and international criminal law cases. She reminded participants that no senior U.S. official has been criminally tried for torture in the United States, and described challenges in pursuing civil cases on those issues in U.S. courts and in universal jurisdiction cases abroad.

Turning to the Court’s novel jurisdictional basis to examine crimes committed against the Rohingya in Myanmar, Kate Vigneswaran of the International Commission of Jurists provided historical context for the Rohingya crisis and detailed conclusions of the Independent International Fact-Finding Mission on Myanmar. The Fact-Finding Mission recommended that the Security Council refer the situation to the ICC, and that a mechanism be created in the meantime to collect and preserve evidence of violations and prepare files for eventual criminal proceedings (as was done through various UN entities for Syria, Iraq and other countries). Vigneswaran pointed out the disparity in time taken by the Pre-Trial Chamber’s decision on the issue of jurisdiction over crimes against the Rohingya (several months) versus its ongoing consideration of the Prosecutor’s request to open an investigation in Afghanistan. Global Justice Center President Akila Radhakrishnan pointed out that although the UN’s investigative mechanism for Myanmar mentions eventual criminal cases, there is no way to pursue criminal cases domestically in Myanmar in the foreseeable future due to the Myanmar government’s refusal to engage in accountability for crimes against the Rohingya. She also contrasted the Security Council’s action on ISIS crimes committed in Iraq with the lack of Security Council action on accountability for crimes committed in Myanmar, also noting that the United States has supported discussion of the Rohingya crisis in the Security Council and has called for accountability for international crimes.

In conclusion, participants described the ICC’s potential to successfully push forward domestic accountability processes, while also noting that significant challenges exist to pursuing accountability before the ICC for crimes committed in certain situations (including lack of jurisdiction and political cooperation).  Various participants also highlighted the importance of the Court’s judicial independence despite political attacks and described States’ obligations and responsibilities to ensure accountability for international crimes as consistent with the Rome Statute.

The American Bar Association’s (ABA) International Criminal Court (ICC) Project is an independent initiative of the ABA Center for Human Rights and Criminal Justice Section that advances international criminal justice and US-ICC relations through advocacy, education and practical legal assistance. More information about the ABA’s ICC Project can be found at its website.

All images of this event are courtesy of © Coalition for the International Criminal Court/Syd Boyd (via Flickr, CC by-ND-NC-2.0)

Side Event at the 17th Session of the Assembly of States Parties of the International Criminal Court, World Forum, The Hague